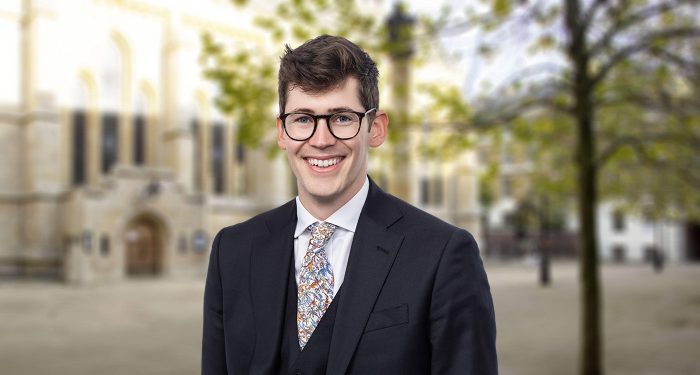 Mark has a broad practice and appears regularly in a variety of courts, as well as producing opinions and pleadings across various practice areas. In the past six months he has also assisted on large-scale disclosure projects for two government departments.

Mark joined Chambers in September 2017 following the successful completion of his pupillage under William Upton, Simon Taylor and Christopher Badger.

Prior to joining Six Pump Court, Mark worked as a paralegal for two years in commercial law firms, which gives him an excellent insight into their day-to-day workings.

Mark is qualified to accept instructions under the Public Access scheme.

From his time with Christopher Badger, Mark saw a thorough cross-section of environmental prosecution and defence work, as well as producing first-draft advices on various areas including the EU Emissions Trading Scheme.

Mark has, in his own right, been involved in the prosecution of various minor planning and environmental offences by undertaking prosecution lists for London Borough Authorities and has recently prosecuted a three-day Crown Court trial for fly-tipping offences.

On the advisory side, Mark has written advice for a global NGO on the impact of the Withdrawal Bill on environmental principles.

He is a regular contributor to Chambers’ Weekly Environmental Law News.

Mark has considerable experience of appearing before the Office of the Traffic Commissioner, as well as the Transport Regulation Unit, in regulatory hearings concerning heavy goods vehicles. He has appeared on behalf of operators, transport managers and drivers in disciplinary matters and also has experience of applications for licences and for the return of detained vehicles.

He is currently instructed in an appeal to be heard before the Upper Tribunal where it will be argued that the inadequacies of the organisation of the Transport Regulation Unit breached an applicant’s right to a fair hearing.

From the start of tenancy Mark has gained significant experience of public inquiries and inquests. He is instructed on behalf of MHCLG in the Grenfell Tower Inquiry and has also assisted the Home Office in the Brook House Inquiry.

In respect of inquests, work highlights include appearing on behalf of the family of a man who died whilst holidaying in St Lucia and appearing for the family of a forester killed whilst felling. In the former, Mark successfully persuaded the Coroner to make a Regulation 28 report to the High Commissioner for St Lucia in the UK. Reported: The Guardian, The Telegraph, The Daily Mail.

Mark has conducted numerous small claims and fast track trials. More particularly, he has also successfully applied for summary judgment in a defamation action, appeared in an appeal against a decision not to grant relief from sanctions and recovered a debt owed personally by the director of a series of Phoenix companies.

He has appeared in the District Registry, successfully acting for an executrix in an application to pass-over, and has experience of advising in respect of the Inheritance (Provision for Family and Dependants) Act.

He is well versed in Police (Property) Act cases for actions concerning the recovery of property seized during the course of investigations.

From experiences during pupillage and working as a paralegal previously, Mark is confident drafting pleadings across a number of practice areas.

Mark assisted in drafting a lengthy advice during pupillage on the merits of challenging the licence renewal of a well-known ride sharing app under the taxi and other legislation.

He has been successful in having the decision of TfL to revoke a suburban London taxi driver’s licence overturned and also has experience of prosecuting various licensing offences, including the sale of prohibited items to underage persons and Housing Act offences, for Local Authorities.

He recently appeared in a mock-trial for the Institution of Occupational Safety and Health (East Anglia Branch) concerned with the recovery of damages for an injury sustained at work.

During his 2nd Six Mark appeared regularly in the Magistrates’ Courts undertaking trials and in the Crown Court, where his work included prosecuting and defending committals for sentence, conducting appeals against conviction and sentence and undertaking Proceeds of Crime Act hearings.

Below is a brief selection of appearances Mark has undertaken.